Alternatives When Crossing is Too Risky


Environmental Modifications to Improve Crossings with No Traffic Control

The design of crossings with no traffic signal or stop sign can be altered to make them easier and safer by shortening the distance to cross, slowing down the traffic, and increasing the likelihood that drivers will yield.

A great resource showing suggestions for design improvements, based on research to increase the likelihood that drivers will yield to pedestrians at these crossings, is

Meanwhile, photos of some examples I've seen are shown below:

Traffic can be slowed by requiring it to move right or left rather than go straight -- the tighter the turn required, the slower the traffic. Features that can deflect the traffic include islands, circles, and bulbouts (bulbouts are extensions or "bumpouts" of the sidewalk or curb into the street).

At this crossing on Connecticut Avenue in Aspen Hill, Maryland, it was impossible to hear the vehicles far enough away to know whether it was clear to cross all 5 lanes. A blind man who had to cross it with his young son to catch the bus decided it was too risky.


Several years later, the Connecticut Avenue crossing was made much safer for pedestrians by cutting off the outside lanes with bulbouts (sidewalk extending into the street), and filling in the middle (turning) lane with a refuge island. Pedestrians only have to cross one lane at a time.


This photo shows the same Connecticut Avenue crosswalk. The cut-through of the refuge island is at an angle, to encourage pedestrians to face the oncoming traffic before crossing. This design may make it difficult for blind pedestrians to line up to cross the second half of the street.

This photo of another crossing in downtown Asheville, NC (courtesy of Janet Barlow) shows a better design for offsetting the crosswalk. Blind pedestrians could approach the second half of the street perpendicularly, and stand alongside the edge of the cut-through to align themselves if needed. 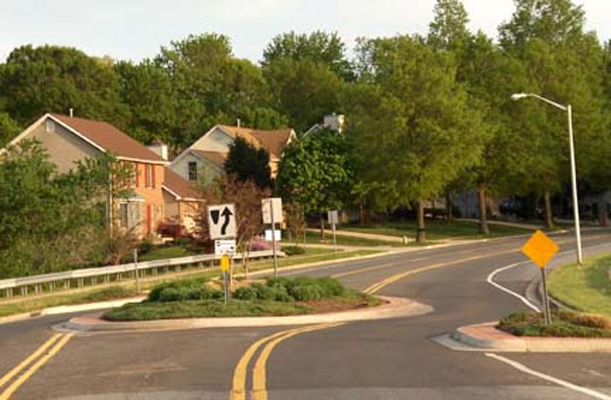 These photos all show a 3-lane, moderately busy residential through-street where a small circular island and two bulbouts were installed to deflect the traffic, making vehicles turn and slow down.


The photo (below left) is the way it looks now and (below right) the photo has been revised to show how it looked before the circle and bulbouts were installed.


A circle and bulbouts were installed in the street in the photo to the left.

(Above) La Jolla Boulevard in San Diego was 80 feet curb to curb before it was redesigned, the crosswalk is now 13 feet curb to curb.
Concept by Michael Wallwork, P.E., Alternate Street Design. P.A.


These three photographs show a crosswalk that was shortened with a bulbout on one side of the street and a pedestrian refuge island in the middle. However detectable warnings should be installed to help blind pedestrians recognize the areas of refuge.


For some reason, it is not possible to hear the approaching cars at this crosswalk in Olathe, Missouri (left) well enough to know whether it is clear to cross, even when it is quiet.


A half block away on the same street, a one-lane roundabout was installed (left). The tight radius slows the traffic, and splitter islands divide the crosswalk into two short crossings. When it is quiet there, it possible to hear the cars well enough to know whether it is clear enough to cross to/from the splitter island. However, if there are not sufficient gaps in traffic to allow it to become quiet, it may still not be possible to recognize when it is clear to cross.
Roundabouts are not necessarily the solution, however, if they are not designed well, and/or if they are in a noisy environment or traffic is too heavy to provide crossable gaps in traffic. The two photos (right)show a roundabout that was installed a block away from the quiet roundabout shown above. This roundabout is two lanes wide so the crosswalks are twice as long, the turning radius is large enough that the traffic can maintain higher speeds, and loud, constant noise from the highway on the bridge nearby makes it impossible to hear approaching traffic until it is a few seconds away. Thus, if a blind person heard nothing coming and stepped out to cross, there could be a car only seconds away from impact.

Shown here is a circle in the middle of the intersection, which slows down the traffic because the circle is large enough to block straight-through vehicles and require them to turn into the perpendicular street before resuming their direction.

When the photo on the far left was taken in 1994, it was not possible to hear all the approaching cars well enough to know if it was clear to cross, even when quiet (see "Challenge Photo #5").

The photo to near left shows the same intersection today. Now, when it is quiet, the cars can be heard with enough warning. The difference? 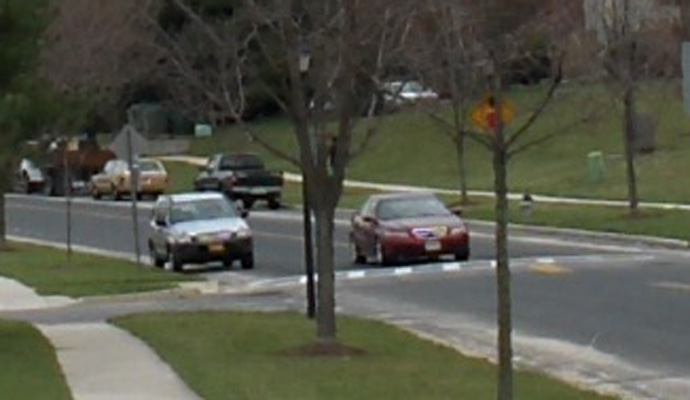 A speed hump which had been installed almost out of sight around the bend (below) slows the traffic and makes it possible to hear them with more warning.